Memories from his Colleagues and Teammates
ENS. Buck Pope was a great man. He was a son, brother, father, husband and friend. He was a warrior. He was a healer. He was a leader among people more senior. He loved to teach. He loved to learn. He inspired others to pursue advanced education and lofty goals. He was a role model for physical fitness. In all, he led by example from the front. He wore a brilliant smile in all he did. Many of us are blessed to have shared in Buck's life. We are better for it. Buck's memory will always speak to me "love your family, continue learning, take care of your people, stay fit, smile and pass it on."

Reading at his Memorial Service as read by Navy Chaplain for Buck at Arlington National Cemetery November 21, 2002
"It is not the critic who counts, not the man who points out how the strong man stumbles, or where the doer of deeds could have done them better. The credit belongs to the man in the arena, whose face is marred by dust and sweat and blood, who strives valiantly... who knows the great enthusiasms, the great devotions, who spends himself in a worthy cause, who at the best knows in the end the triumph of high achievement, and who at the worst, if he fails, at least fails while daring greatly, so that his place shall never be with those cold and timid souls who have never known neither victory nor defeat." -Teddy Roosevelt 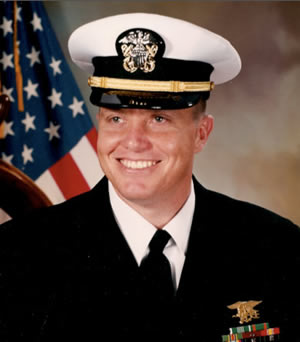 Biography of Ensign Jerry "Buck" O'Real Pope II
Ensign Jerry "Buck" O'Real Pope II was born 2 October 1967. A native of Tallahassee, Florida, he graduated from Leon High School in 1985. After a year of junior college, his competitive spirit, athletic ability, and undying devotion for his country led him to the United States Navy. The Navy assigned him as a fire controlman when he enlisted in 1987. However, intrigued with the history of the Navy SEALs, he actively sought assignment to Basic Underwater Demolition School/SEAL (BUD/S) Training.

Later that year, Petty Officer Pope received his wish with orders to Coronado, California to attend BUD/S. Unfortunately, only weeks before graduation he suffered from a near fatal training injury. Following recovery and rehabilitation, Petty Officer Pope returned to BUD/S to complete training and graduate with Class 165. After BUD/S he was assigned to an east coast SEAL Team for duty but not long after his arrival he felt his interest lay in medicine and cross-rated to hospital corpsman. As a Navy SEAL qualified hospital corpsman, he deployed multiple times throughout the U.S. Southern command before being transferred to Fort Bragg, North Carolina to serve as an instructor at the renowned Joint Special Operations Medical Training Center.

Despite an intense teaching schedule, Petty Officer Pope attended college during his off-hours and within a few years earned a Bachelor of Health Science degree with honors from Campbell University and acceptance to the Department of Defense Intra-Service Physician Assistant (PA) Program. There Officer Candidate Pope continued to maintain his high academic standards graduating February 2001 in the upper percentile of his class with a degree from the University of Nebraska and a commission as a medical service corps officer.

Following PA graduation, Ensign Pope received orders to the Naval Medical Clinic in Quantico, Virginia where he served until August 2002 when he accepted a volunteer assignment to a specified Individual Augmentee program supporting special operations. Ensign Pope was killed in a motor vehicle crash while temporarily assigned to the American Embassy Yemen for ongoing counterterrorism operations on 16 October 2002. He was interned at Arlington National Cemetery on 21 November 2002.

"Buck," as his friends and teammates knew him, was not only the consummate professional within the special operations and medical communities but someone who possessed an uncanny ability to smile during times that would frustrate even the most patient of individuals. Often he would discuss his past misfortunes with a laugh and calming demeanor that would make others wonder how he was able to maintain his personal stamina and sense of humor during some of the most difficult of times. A selfless man, he often volunteered for the worst assignments and gave more than expected. He was a close friend to many, and everyone who knew him misses him.

Congratulations to Jaime Hurtado, a decorated U.S. Marine, for being the 1st recipient of Buck's Scholarship!

Read more about Jaime who served as an infantry team leader, conducting missions in various parts of the world including Kosovo, U.A.E, Kenya, Djibouti, Macedonia, Kuwait, and Iraq.

In 2019 Jaime was given the opportunity to learn SCUBA diving, something that has helped him tremendously with his PTSD and chronic back pain. He is very thankful that he was chosen as a recipient of Buck’s Scholarship and cannot wait to see what other opportunities this program may bring.

Dr. Gabrielle K. Gabrielli founded Life Worth Leading because she saw a need for people with disabilities to have opportunities for to improve physical and mental health. Contact Dr. Gabrielle K. Gabrielli and complete the scholarship application if you know a veteran who is a person of character who would benefit from SCUBA diving training in Tallahassee, Florida and the surrounding areas.